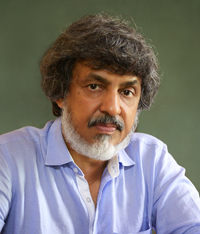 Diwan Manna has been actively capturing/creating images in India, Europe, America and South East Asia since 1980. He is better known for his conceptual photographs. He was born in a small town, Bareta, in Punjab, a north Indian state known for its agricultural riches.
He was trained as a graphic artist and painter but chose to be a photographer instead.
He has been given National Academy Award, a once in a lifetime award by the National Fine Arts Academy of India along with many other prestigious awards and honours.
He has been exhibiting his work internationally since 1986, including France, United Kingdom, Germany, Italy, Poland and India.
Fifteen of his works are in the permanent collection of Museum Fur Indische Kunst, Berlin now known as Museum of Asian Art and 28 prints in the Museum of Modern Art, Saint Etienne, France apart from other renowned institutions.

Diwan Manna is known for his soulful images and is a pioneer among art photographers in India. He is one of the first exponents in conceptual photography in the country. His artistic technique and expression is unique and has a style of its own.

Most of his work is about his journey in search of trying to come to terms with the insidious and unrecognized forms of degradation of our sense of life and honour within ourselves as well as in others. He is not merely interested in presenting images of destruction of human goodness, courage and beauty, but tries to tap the unsuspected and as yet unrealized sources of tenderness, fortitude and humanity in us.

Some of the significant images that come to a serious art connoisseur’s mind are from the series Shores of the Unknown, After the Turmoil, Alienation, Violence and Conceptual Self Portraits.

He shows us many aspects, in three successive phases, of his work. The black and white of his first work, and then the fiery contrasts of colours in his more recent work are only metaphors of eternal combat that men engage in to reach the light.

Diwan Manna reveals both his real compassion for his contemporaries as well as his admiration in front of the beauty and dignity of beings, for he knows how to affirm in his colour compositions his conviction of seeing in woman the future of the world and all its magic.

This is how Diwan Manna speaks to us and passes from social violence, precariousness of life of men and women living in the shadows like the forgotten, to the solitude of beings and their anguish. Few series of black and white photographs of technical mastery and perfect classical beauty precede here then big photographs, in intense colours, with carefully thought out portrayals that are like inner and symbolic dreams.

An encounter with these pictures is a disquieting and an empowering experience. It brings out our hidden humanness, which in fact becomes an experience of self-realization for each one of us. It opens a reservoir of fellow feeling across cultures, languages and political milieus.

In a way the experience of his images recovers for us our lost humanity. We can hear the pangs within us of the humanity being reborn.

Theater/film actors, art students, staff at work/study places, professionals and friends have contributed in the making of these images by way of acting and modeling.