Le Havre, Chandigarh and Brasilia were three monumental construction sites of the middle of the XXth century. These three cities, signed by famous architects and their teams (Auguste Perret for Le Havre, Le Corbusier for Chandigarh and Oscar Niemeyer for Brasilia), located on three different continents, are now seen as major works in the history of architecture and town planning. This exhibition aims at showing them from the plural point of view of photographers from different countries.
The look of Lucien Hervé
Lucien Hervé (born in 1910), is a major link between these three cities. As Le Corbusier's photographer, he accompanied the great architect twice to Chandigarh in 1955 and 1961. His perception of the new Indian city, as well as of Brasilia that he visited in 1961, is completed by a report recently
rediscovered. It is the commission he was entrusted with by the General Tourism Administration to testify on the reconstruction of Le Havre. Sixty photographs, vintage or modern, combine famous images (The Square of the Three Powers in
Brasilia) and other photographs less well known, showing scenes of everydaylife in the streets od the cities. 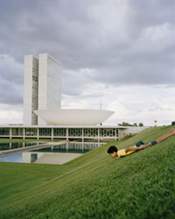 Looking at Brasilia differently
In 1960 President Kubitschek inaugurated the city designed by Lucio Costa and Oscar Niemeyer one thousand kilometers inland. Emmanuel Pinard (born in 1962) tracks down the interval that separates official buildings, housing districts and the road network and show that Nature has not been as domesticated as
one thinks. George Dupin (born in 1966) focuses on the famous central axes and Jordi Colomer (born in 1962) pursues his Anarchitekton project in which a
person runs throughout the city, with the model of an emblematic building in his hand. Brazilian photographer Caio Reisewitz (born in 1967), concentrates
instead on the Itamaraty palace, the ministry of Foreign Affairs and Niemeyer's masterpiece, which he shot from the inside, empty. His compatriot Arthur Monteiro (born in1978) searches more for man's traces in this dilated space. 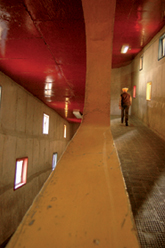 Imagine Chandigarh
In this Indian part of the former state of Pendjab, Le Corbusier was not able to carry his project through. Following the independence and the partition of Pakistan the region was divided in two. Le Corbusier's Capitol is not yet finished and the capital he designed for one State now hosts three governmental administrations. Emmanuelle Blanc (born in 1971) studies the manner in which the public space is organized. Stéphane Couturier (born in 1957) aimed at creating “respectful and impertinent” images by coloring Le Corbusier's raw concrete facades. Louidgi Beltrame (born in 1971) staged a video on the Italian neo-realist model introducing fiction into a documentary's framework, in which a town's planning institute in Chandigarh sends a photographer to Brazil. Lastly, Diwan Manna (born in 1958), who resides in Chandigarh, looks for the symbolic dimension of the city's official buildings.

Illustration : Diwan MANNA Corridors of Power Series, 2006, color photograph 106 X 71 cm Copyright FLC Le Corbusier Foundation, Adagp. Artist's collection.
Rediscover Le Havre
A unique experience of reconstruction, on a strict urban pattern, of a city destroyed by the war, the territory of Le Havre was written into the World Heritage by the UNESCO in 2005. In the framework of a public commission to which the city and the Ministry of Culture have been associated, Véronique Elléna (born in 1966) and Nancy Wilson Pajic (born in 1941) were invited to give their vision of the interior/exterior theme. The former shows the city facades come to life when evening falls, while the latter studies all the thresholds -entrances, halls and stairwells - to enhance the care given to decorative details.
INTERNATIONAL SYMPOSIUM